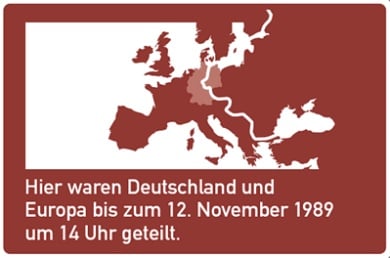 Posted at every intersection along the former border between what once was West and East Germany, the signs will show the path of the Iron Curtain through Europe and the date each crossing was opened, the Transport Ministry in the German state of Saxony-Anhalt announced on Thursday. A design from the Munich firm Büro für Gestaltung Wangler & Abele beat out 20 other entries in a public competition.

Germany will start putting up signs after German Unification Day on Oct. 3 and aims to finish the project before the 20th anniversary of the fall of the Berlin Wall on Nov. 9, 2009. Each sign will cost €5,000, German newswire DPA reported. Wangler & Abele also won €5,000 in the competition.

The design is a token gesture of the end of the Cold War and aims to remind Germans that the Iron Curtain split all of Europe, Wangler & Abele chief executive officer Ursula Wangler told The Local.

“It is a vital symbol of a situation that affected the entire world. That’s why it was important to show all of Europe,” Wangler said.

The project was initiated by the European Parliament, which encouraged European Union member states in 2005 to develop an Iron Curtain Trail modeled on the Boston Freedom Trail, a 4-km path through American Revolutionary War sites in Boston. The German states of Bavaria, Brandenburg, Hessen, Saxony-Anhalt, Thuringia, Lower Saxony, Saxony, Berlin, Mecklenburg-Western Pomerania and Schleswig-Holstein are participating.