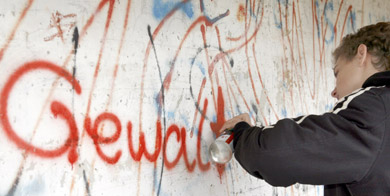 Almost a third of all German schoolchildren agreed “completely” with the statement that there are too many foreigners in Germany. Another third of those asked “mostly” agreed.

The report by a nationwide committee working to combat youth violence was prepared for Thursday’s conference of German state interior ministers and was leaked by the regional daily paper Neue Osnabrücker Zeitung.

Almost a fifth of the 9th grade kids asked also had open prejudices against Islam and one out of every 13 admitted to committing a hate crime like spraying a swastika on a wall or damaging the property of foreigners.

The study included 50,000 children with both German and non-German background in 61 different cities. The survey of youth opinion was conducted in schools across the country under the auspices of the federal Interior Ministry and the Institute for Criminology Research in Lower Saxony.

The new study confirms the findings of other research into racism among young people, said Gabi Elverich at the Centre for the Prevention of Right-Wing Extremism and Xenophobia at the German Youth Institute.

“Studies prove there is a problem of xenophobia among young people in Germany,” Elverich told The Local.

“In the west, one study shows there is a particular problem with people aged over 65, so it’s not just young people. Something else that has been noted is that the problem is actually worse in areas without immigrants.”

While many schools in Germany are working hard to combat racism and xenophobia, overworked teachers often find it hard to get to grips with the root causes of the problems.

“This kind of work [combating xenophobia] is not as easy as doing maths and geography. To teach the issues, teachers have to confront their own attitudes too. And at a time when we have lots of educational reforms, teachers are finding it a strain,” Elverich said.

Civic education is part of the German curriculum, but little time is devoted to the subject, Elverich said. Much of the anti-racism education in schools takes the form of troubleshooting, with little regular attention given to the issue, according to Elverich.

“Often when something happens they have a workshop, but the problem is that one day won’t change the world.”