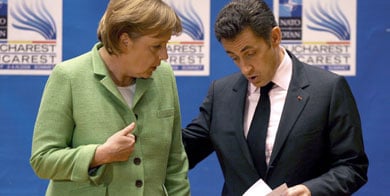 Citizens in all five European Union nations surveyed see Germany as leader of the bloc, including 57 percent of Spaniards and Germans, 39 percent of Italians and 35 percent of Britons, according to the Harris Interactive poll released by France 24 television and the International Herald Tribune.

In France, despite President Nicolas Sarkozy’s energetic efforts to seize back the initiative in Europe, 68 percent of respondents still believe Berlin holds the reins in Brussels. Asked to name Europe’s most influential personality, Merkel also came out well ahead of Sarkozy – including in France where 38 percent cite the German leader against 18 percent their own president.

Germany is also seen as the country likely to have the most influence on the rest of Europe over the next decade.

Across the Atlantic, however, a clear majority of Americans, 63 percent, believe Britain to be the current leader of Europe, a view shared by 33 percent of Britons and 34 percent of Italians.

US respondents also believed British Prime Minister Gordon Brown to have most influence in Europe – at 23 percent – followed by Sarkozy on nine percent and Merkel on eight.

Asked who they would choose as president of Europe, Merkel gets the popular vote, with only the British and Americans preferring former British prime minister Tony Blair.

The survey of 6,478 people was conducted online between February 27 and March 6.