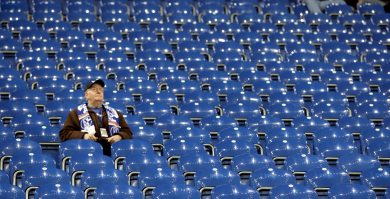 Krkic, who will not turn 18 until the end of August, struck as early as the 12th minute with a valuable away goal to put the Spanish giants firmly in the driving seat for next Wednesday’s second leg at the Nou Camp stadium. Barcelona coach Frank Rijkaard was relieved that after a crushing league defeat by Real Betis last weekend which virtually erased their chances of the title that his side had rebounded.

“I think one can say that is a good result,” said the former AC Milan and Dutch playing legend.

“The team worked well to earn this win and I would like to congratulate them. We can be happy with this evening’s efforts. There were some things missing from our game. The squad have reacted well following the defeat by Betis, but we changed nothing from Saturday, we worked like we do every day, but everyone knew that it was an important match this evening.” Schalke striker Gerald Asamoah said that his side had been way too respectful of their opponents.

“We gave Barcelona too much respect in the first-half and then we did wake up,” said Asamoah. “We should have put them under pressure from the beginning, but unfortunately it didn’t come to a goal. We lost today (Tuesday), but have to have hope for the replay. Without hope there is no point us travelling to Spain.”

Ex-Arsenal striker Thierry Henry seized the chance and fired at Schalke’s keeper Manuel Neuer who parried the shot, but Henry snatched the re-bound and slid a pass to teenager Krkic to bury his shot in the top of the net. It was cruel luck on Neuer, the hero in Portugal last month when his outstanding performance denied FC Porto to book the Germans into the last eight.

Schalke immediately worked hard to get back in the game but Asamoah and Kevin Kuranyi could only manage four first-half shots on goal, despite the Germans having more possession in the first-half.

Schalke have not reached the last eight of Europe’s elite club competition for almost five decades, but now face a mountain to climb for next week’s return leg as the second-half proved as fruitless as the first 45 minutes. Germany striker Kuranyi is a concern for next week’s second-leg after he was taken off after 60 minutes after struggling with a virus. Both Asamoah and Turkey striker Halil Altintop went perilously close to forcing the equalizer within minutes of each other at the 70 minute mark, but Barcelona’s defence held firm.

And Westermann was incensed when his appeals for a penalty were turned down moments later.

“That was for me a totally clear penalty and the defender hit me in the back, the replay will clearly show it,” said a fuming Westermann after the final whistle.

There was a flurry of late yellow cards, four to each side, as Schalke pushed to level the scores while Barcelona worked just as hard to run the clock down, but there was to be no late drama.

The second leg will be played at Barcelona’s Camp Nou on 9 April and the home side are now overwhelming favourites to make the semi-finals in their bid to repeat their 2006 Champions League win.