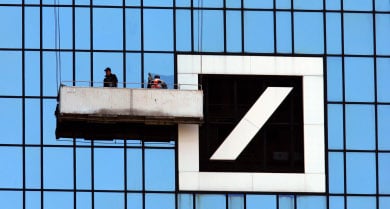 The Frankfurt-based bank said it estimated first-quarter writedowns would reach roughly €2.5 billion ($3.9 billion) due to bad loans in the housing sector.

It’s announcement came after UBS said it would take a second round of provisions amounting to about $19 billion, the single biggest hit so far from a financial crisis that was sparked by the collapse of the US market for high risk, or subprime, mortgages.

Several public German banks are among the banks hardest hit by the subprime crisis, with business lender IKB on life support from the state and public savings banks, and regional bank SachenLB rescued through a takeover by peer LBBW. The second-biggest German bank, Commerzbank, took provisions totalling €583 million last year to cover possible losses from the debacle.

Financial markets erupted after the US subprime market collapsed because many of the mortgages on which US borrowers defaulted had been repackaged and sold as securities to banks and other financial institutions around the world. Credit markets then dried up after banks were unable to accurately estimate potential losses and became wary of lending to one another, a situation that prevails to this day.

“Conditions have become significantly more challenging during the last few weeks,” it added.

Deutsche Bank said its chairman Josef Ackermann would address an investor conference in London later in the day and comment on the current “operating environment.”

Official first-quarter earnings are to be reported April 29. Shares in Deutsche Bank leapt by 2.85 percent to €73.74 in midday Frankfurt trading Tuesday, while the Dax index of leading shares showed an increase of 1.41 percent overall.

Dealers and traders said the bank’s latest writedown fuelled hopes that the worst of its problems might be over, noting the comparison with UBS. Deutsche Bank had warned last week it might miss 2008 earnings targets due to the international financial turmoil.

The bank is aiming for pre-tax profit of €8.4 billion, down slightly from €8.7 billion last year, it said in its annual report.

In 2007, Deutsche Bank posted a record net profit of €6.5 billion after managing to avoid massive losses that hit other major banks following the collapse of the US market for high-risk home loans.

This year, however, the bank might not be able to compensate for weaker activity in financial products that helped its investment bank division provide the majority of profits in 2007, it said last week.

Merck Finck analyst Konrad Becker said on Tuesday: “We cannot exclude the possibility that Deutsche Bank will release a negative pre-tax result for the first quarter, but we think it is unlikely.”

The private bank said it maintained its ‘hold’ recommendation on Deutsche Bank shares, “as we think the burdens deriving from the financial crisis can still not be quantified yet.”

PARTNER CONTENT
Five reasons to meet up in Geneva in 2019
Url copied to clipboard!