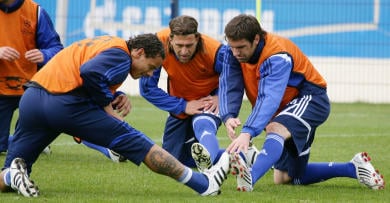 Barcelona threw away a two-goal lead to lose 3-2 at Real Betis on Saturday – which frustrated coach Frank Rijkaard – and Valdes says the Spaniards need a morale-boosting win over their Bundesliga opponents in the first leg clash.

“Against Schalke 04 we will be positive from every point of view,” said Valdes.

“The Champions League is a very attractive competition for everyone and we can go into the game feeling confident and knowing that a good result will boost our morale.”

Both Barcelona and Schalke are third in their respective leagues but have struggled for form of late.

Barcelona have lost four of their seven games in March, while Schalke have been just as erratic in the German league although a 0-0 draw with Karlsruhe on Saturday moved them up to third.

Schalke 04 coach Mirko Slomka has warned his side they must raise their game if they are to have any chance of stopping Barcelona in Tuesday’s first leg.

The German side knocked out 2004 champions FC Porto in the last round, but Slomka knows that Tuesday’s game is the biggest of the season.

“The intensive preparations for Tuesday’s game began at 5:20 pm on Saturday, we have to improve and we know the targets we have to achieve against Barcelona,” said Slomka.

The coach is all too aware that double European Cup champions Barcelona will be ruthless with his side at the Veltins Arena.

“We have to be better and stick tightly together, they will punish any mistakes we make immediately,” he said.

This is virtually new territory for Schalke.

They haven’t travelled this far in Europe’s elite club competition for almost five decades, but for Slomka the experience of playing Barcelona should leave his side wanting more.

“With the fans behind us anything is possible. We’re playing Barcelona, that should be motivation enough for the players to qualify for the Champions League again through the Bundesliga.”

If they prove victorious over the two legs, Schalke will face the winners of the tie between AS Roma and Manchester United, but no one in Gelsenkirchen is thinking beyond the quarter-finals.

Schalke will be without midfielder Ivan Rakitic who has an ankle injury, while Brazilian captain Marcelo Bordon proved his fitness in the draw with Karlsruhe.

Barcelona central defenders Rafael Marquez and Gabriel Milito have been included in Rijkaard’s travelling party for the trip, although Samuel Eto’o faces a fitness test on an injured calf.

Mexican Marquez has not played since injuring his right foot in February, while Milito has been nursing a groin injury since the Copa del Rey defeat at Valencia in March.

Deco and Ronaldinho will not travel to Germany either but captain Carles Puyol is fit.

The second-leg will be played at Barcelona’s Camp Nou on April 9.