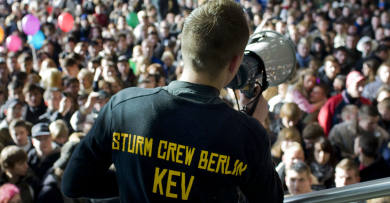 “The whole action was very surprising and challenging for us,” said McDonald’s corporate spokesperson Michael Schramm on Sunday.

Workers at the Ostbahnhof station McDonald’s told reporters on Saturday that the action was “a very normal order, only bigger.”

“Sturm Crew Berlin,” the group that organized the “flash mob” action, arranges for large groups of people to spontaneously assemble in public and stage a simultaneous action – like applauding, telephoning, or mass burger orders. They assembled at Berlin’s Alexanderplatz station and travelled together to the Ostbahnhof station, just a few stops away.

The group said on Saturday that they’d beat the previous record of 4,500 burger orders in Munich.

The McDonald’s staff took several hours to finish the massive order of hamburgers, cheeseburgers and chicken burgers. A German Federal Police spokesperson said the the action was peaceful, and the participants, who were mostly young men, didn’t fully disperse until late evening.