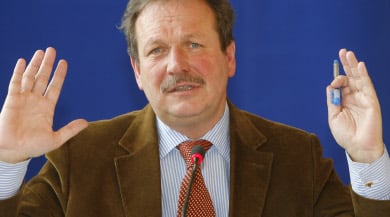 Verdi's Bsirske shows how much more cash he wants. Photo:DPA

“I think that it will be an intense discussion that will certainly not be easy because all participants will have to swallow bitter pills,” Bsirske said.

On Sunday evening negotiations were unexpectedly extended by another day because the employers had improved their offer, union insiders said.

Verdi has organized limited strikes January 10 to underscore its demands for higher wages. Arbitration began again on March 16 after talks between the union and employers failed earlier in the month. Mediators Lothar Späth, the former premier of the state of Baden-Württemberg, and Herbert Schmalstieg, the former mayor of Hanover, were at first unable to reach an amicable compromise with the union, which represents 1.3 million public sector workers.

The mediators matched union wage demands of an 8 percent pay hike to offset higher food and fuel costs. But they linked it to an increase of working hours for staff in the west of the country to 39.5 hours. Most workers in the eastern states currently work about 40 hours per week.

Interior Minister Wolfgang Schäuble on Saturday said he hoped Germany would be spared a protracted labor battle, since it would be in no one’s interest. He said employers and Verdi had a responsibility to find a solution that did not pose a danger to the labor market, especially in these times of global financial turbulence.

Verdi chief Frank Bsirske balked, however, calling on employers to make a better offer. He said otherwise a strike vote would be held, warning that the union was considering widespread, open-ended labor action that could have brought Germany to a standstill.