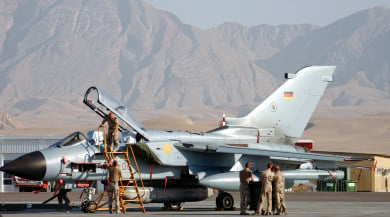 In an interview published in the Monday edition of the German daily newspaper Die Welt ahead of a NATO summit in Bucharest this week, Bush took pressure off Germany to increase its commitments in the country.

Asked if Washington expects Berlin to boost its presence in Afghanistan by deploying troops to the south, which has seen more fighting than the more peaceful north, Bush gave German Chancellor Angela Merkel his support.

“No, I want our partners to decide how much they can take on. I want Chancellor Merkel to be able to be satisfied with the outcome,” the president told Die Welt. “In other words, I don’t want other states to do anything they don’t feel able to do politically.”

And pressed on whether there would be a possible ultimatum from Washington to Berlin on the issue, he said: “No, there won’t be one.”

Public opinion in Germany is strongly against deployments in the battle-torn south. Twenty-five German soldiers have already died in Afghanistan since 2001. The government has so far rejected pressure from other NATO countries, notably Canada, to send more troops.

The German media reported in January that Germany’s Defence Minister Franz Josef Jung had received an “unusually harsh” letter from his US counterpart, Robert Gates, pushing Germany to send troops to southern Afghanistan.

Germany has some 3,200 troops in northern Afghanistan and in Kabul but Berlin has resisted pressure from NATO allies to deploy its forces in the south of the country where US, British and Canadian soldiers are bearing the brunt of a tenacious Taliban insurgency.

Despite the conciliatory comments from Bush, the head of coalition forces in Afghanistan on Sunday called on Germany to deploy its rapid reaction force in the restive south as well as more troops in the relatively calm north.

The German QRF is due to replace in June a Norwegian contingent based in northern Afghanistan which in the past two years has turned down two requests from ISAF headquarters to help out in the south, according to Spiegel.

In a separate interview with daily newspaper Tagesspiegel to be published on Monday, McNeill said that Germany should also boost troop numbers in the north where he said criminality, often linked to narcotics, was rife.