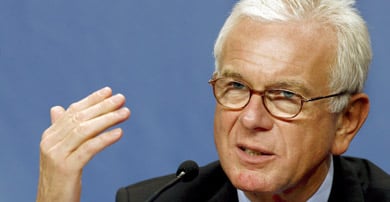 “Beijing must decide,” said Pöttering in an interview with Germany’s Bild newspaper. “It must negotiate with the Dalai Lama immediately.”

“We should not exclude the possibility of a boycott of the Beijing Olympics. We want a successful Games, but not at the price of the cultural genocide of the Tibetans,” he said.

Pöttering, a member of Angela Merkel’s Christian Democrats (CDU) and the European Parliament’s conservative Christian bloc, said parliamentarians would discuss the situation in Tibet on Wednesday.

The Chinese military on Monday was maintaining a lockdown of Tibet and nearby provinces where deadly protests against China’s 57-year rule of the region have taken place over the past two weeks.

Beijing has insisted that exiled Tibetan spiritual leader, the Dalai Lama, is masterminding the protests, and that the unrest is a deliberate campaign to sabotage the Games.

The CDU’s foreign policy expert, Eckart von Klaeden, said threatening China with a boycott was the wrong course of action. Rather, he advised taking Chinese Premier Wen Jiabao by his word to let international observers into Tibet.

Federal Justice Minister Brigitte Zypries (SPD) said she planned to extend the German-Chinese dialogue on democracy by two more years, despite the violent suppression of the protests in Tibet.

“Dialogue is our philosophy,” she said. “It’s about supporting China as it tries to build more democratic structures.”