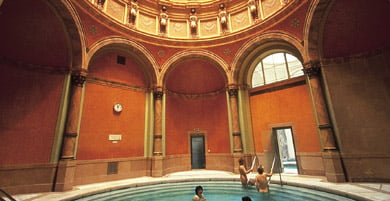 As anyone with some basic German will know, baden means to bathe. But double it and you have a charming town along on the banks of the Oos River nestled amongst hilly vineyards of Riesling with a splendid 19th-century spa tradition.

The gorgeous thermal baths that used to draw royalty from across Europe are now a major attraction for Germans looking for the particularly Teutonic rest and relaxation of a Kur.

Located in the southwestern German state of Baden-Württemberg on the edge of the undulating Black Forest and not far from the French border, Baden-Baden has 12 thermal springs naturally heated at 69 degrees Celsius all year round.

Napoleon III, not yet an Emperor was said to have planned the Revolution of Strasbourg while relaxing in Baden-Baden. Bismarck and Emperor Wilhelm I also spent leisurely hours in town at the baths. Brahms also dwelled here from 1865 to 1874, but you don’t have to be a blueblood or a famous composer to be inspired by the town’s serenity, waters, and acres upon acres of surrounding woodland.

“Baden-Baden is so nice that you have to name it twice,” former US president Bill Clinton quipped after a visit here, and he’s certainly not wrong – even if the double name actually was coined in the early 20th century to distinguish the city of 54,000 from other Badens in Austria and Switzerland.

I don’t know how many spas Bill’s been to, but I’ve visited plenty over my seventeen-year tenure in Europe. Baden-Baden beats the best addresses in Switzerland, France, Italy and Belgium. If you enjoy the spa experience, it is simply not to be missed.

I started off my recent visit at the Caracalla Therme (Römerplatz 1, Tel: +49 (0) 7221/275940) where you can lounge around and swim in circular patterns daydreaming at the baths. The water is deliciously warm and not too salty because here there are no sulphur springs, so you don’t get that smelly after-aroma. You can also get a sauna here. Moving on to the gorgeous 19th-century building at the Friedrichsbad, you can get several types of Kur therapies. Roman-Irish baths are housed here, some having been installed over 2,000 years ago. If you’d like to searching for different therapies when looking at the website head to Caravitalis.

They offer classical Indian Ayurveda. There’s a Cleopatra Bad – a bath of milk and honey. And an Aroma Bad made with rose, orange, lavender and lemongrass will tingle you awake.

I opted for the body and soul Hot and Cold stone massage, which was just what I needed after a stressful week. I had a beauty treatment of oils smoothed all over my body where I was then expertly wrapped in a plastic film as I lie atop a heated waterbed. Forty or so minutes later the oils had penetrated my skin and I felt silky smooth. The woman who was in charge gave me a hot cup of green tea, put a downy bathrobe around me and directed me to the pure oxygen room where I rapidly fell asleep for 15 minutes. Afterwards I was ready for Weißwurst in honey mustard and oxtail soup at the only Munich beer hall in town located on Gernsbacher Strasse 9 (Tel: 07221/22311) in the old town. The main course will put you back between €7-22 which isn’t too bad in Baden-Baden.

Shopping isn’t quite such the bargain here, but the nearby pedestrian zone in the centre is chockfull of your typical designer shops other non-branded stores that are more interesting yet pricier. But you might want to save some of your cash anyway to try your hand at a game of luck.

Marlene Dietrich called the town’s Kurhaus the “most beautiful casino in the world” and I’d have to agree. Compared to the kitsch of Monaco, this small hand-painted four-room wonder has class. It surprises me that not a single James Bond film has been made using this location. Dostoevsky wrote “The Gambler” while living in Baden-Baden from 1863 onwards, having lost most of his own fortune at the local casino. The Trinkhalle or drink hall was used by visitors who would gulp down a steaming glass of thermal water to cure themselves of illness. This stunning architectural wonder sits across from the casino and is now open to the public who can purchase a mug of the water for €0.20.

There are plenty of fantastic accommodation options in town, but I stayed at the charming four-star boutique Hotel Belle Epoque located at Maria-Viktoria-Strasse 2c.

Our suite was the “French” one adorned with Louis XIV’s profile against Marie Antoinette’s. The light green interior with matching chaise longue and petite dressing table was fit for a well, a queen. But that wasn’t me because I guess I’m not petite enough, oh well.

The bubble bath and whirling jets were great after spending a day golfing or touring the wine region, or running up the hills as my husband, a Marathon runner did. Exhausted after that he soaked his weary bones in the Jacuzzi before heading off to a sumptuous breakfast.

We chose to dine our second night at the Belle Epoque’s adjacent hotel, Der Kleine Prinz, at Lichtentaler Strasse 36 because we wanted a little romance having had our fill of Bavarian oom-pah-pah. We started off with champagne and treated ourselves to a marine masterpiece – lobster, scallops and an assortment of seafood adorned our plates in perfect portions. One needn’t be a gourmet to realize the chef here has taken the best of two worlds and delivered it on a platter. With the town a mere 40-minute drive from France’s Alsace, it’s obvious that he’s taken the best of both cuisines in his kitchen.

For detailed information, contact the local tourist office. Getting to Baden-Baden is a cinch with the train from both Frankfurt am Main and Stuttgart. The town is open for bathing, gambling and dining all year round.