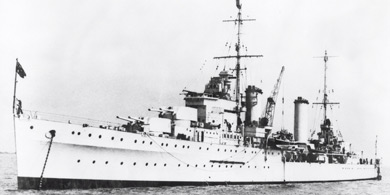 The discovery of the apparently intact hull of the HMAS Sydney, sunk in a bloody battle with the German raider Kormoran in which all 645 men on the Sydney lost their lives, puts an end to an enduring seven-decade war mystery.

2,470 metres (8,150 feet),” Rudd said in Canberra. “I am advised that the hull has been determined to be largely intact,” he said, adding that he hoped that the discovery would bring closure to the families of the 645 sailors who died following the November 1941 clash.

The announcement came just one day after the team searching for the HMAS Sydney since 2001 revealed they had found the wreckage of the Kormoran, raising hopes that the mystery of the Sydney would soon be solved. But the speed of the discovery of the ship on Sunday took Australians by surprise, even as investigators stood poised to photograph the famous ship in a bid to ascertain what happened during the Indian Ocean clash.

The Royal Australian Navy ship was last seen badly damaged and steaming over the horizon after exchanging gunfire with the Kormoran, which also sank after the battle that took place about 800 kilometres (500 miles) north of Perth. The sinking of the pride of the Australian fleet shocked the country – particularly as it disappeared without a trace and with the loss of all hands on board.

“For 66 years, this nation has wondered where the Sydney was and what occurred to her, we’ve uncovered the first part of that mystery … the next part of the mystery, of course, is what happened,” navy chief Vice Admiral Russ Shalders told reporters.

Graphic eyewitness accounts from the 317 survivors of the Kormoran’s 397-strong crew, picked up in the days after the battle, were regarded with scepticism. But Shalders said the Kormoran’s wreckage was found where German survivors said it would be.

“The disposition of the wrecks is as it was recorded by the survivors of the Kormoran at the time, surprisingly,” he said.

The Sydney was detected by a high-resolution sonar imaging device that was dragged behind a ship and confirmed the presence of a wreck with the same dimensions as the HMAS Sydney.

“(Search leader) David Mearns has indicated that there is no doubt that this contact is the Sydney,” Admiral Shalders said.

Rudd, who said the German government had been informed of the Kormoran’s discovery, also revealed that his Environment Minister Peter Garrett was in the process of issuing an interim protection for both ships, which are regarded as tombs.

“I’m advised it provides immediate and early protection of the sites against any unauthorised intrusion,” he said.

The prime minister said it would be a hard day for family members associated with the Sydney, as he extended the government’s condolences to the relatives of those who lost their lives.

“This is over 65 years ago, but pain and family loss even at 65 years removed, is still pain, and very deep pain,” he said.

Surviving relatives greeted the discovery with relief and sadness that other family members had died without knowing the final resting place of their loved ones.

Nick Walden, whose uncle Albert Hollington was an acting leading seaman on the Sydney, said he hoped the discovery would shed light on why there were no survivors from the Australian ship.

“We can’t still work out why nobody got off the Sydney, why none of the sailors were able to get into life boats,” he said. “It’s the mystery still, we need to find that out.”