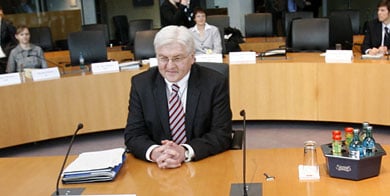 Steinmeier told a parliamentary committee that suggestions he had previous knowledge of the CIA plan to capture Mohammed Haydar Zammar in late 2001 were “completely absurd.”

“In November 2001 there was neither Guantanamo nor the practice of rendition that we needed to contend with,” he said, referring to the US prison for terror suspects and the secret transfer of such suspects for interrogation.

Zammar was detained in Morocco in an operation involving CIA agents and handed over to the Syrian authorities weeks later. He was reportedly tortured while in their custody.

Zammar was jailed for 12 years by a Damascus court in February 2007 on charges of membership of the banned Muslim Brotherhood. He did not face prosecution on the accusations originally levelled against him – of recruiting some of the September 11 suicide hijackers.

He was briefly detained in Germany in October 2001 as he was suspected of having had contacts with Mohammed Atta, who headed a Hamburg cell of Islamic extremists and is believed to have been the hijackers’ ringleader. But he was later released due to insufficient evidence.

The suspected collaboration of the German and US intelligence services in his case forms part of the brief of the German parliamentary inquiry. The role of Steinmeier, who was former chancellor Gerhard Schröder’s chief of staff at the time, has come under particular scrutiny.

He told deputies Thursday that records show that the federal crime office had provided US authorities with Zammar’s travel itinerary, saying that Germany had a vested interest in preventing further attacks by Islamic extremists.

“Not only the German public but also those in positions of responsibility were in a state of shock after September 11,” he said. “Zammar had one of the longest-running careers among the advocates of holy war living in Germany.”

But Steinmeier, who was responsible for coordinating the work of the security services at the time, said he himself had only learned in June 2002 that Zammar was in custody in Syria. He defended the decision to send German investigators to question Zammar in a Syrian prison but said Berlin had a clear policy on the treatment of criminal suspects.

“Active or passive involvement in torture is out of the question for German officers… at any point and under any circumstances,” Steinmeier said.