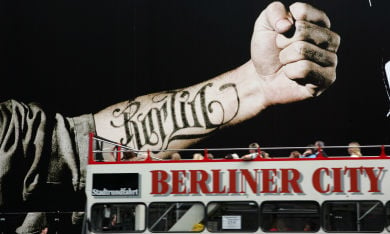 “The city’s economic growth is under threat,” the head of the chamber of commerce in the German capital, Jan Eder, warned.

Shops in Berlin have seen trade drop by an average 20 to 30 percent since buses, trams and the underground ground to a dead halt last Wednesday and a few businesses have reported a 50-percent loss in turnover, according to the retail federation HDE.

“Some stores could close if this carried on much longer,” HDE spokesman Hubertus Pellengahr told AFP. According to the chamber of commerce, late deliveries are also proving a serious problem.

Commuters have largely managed to cope with the strike by hopping onto their bicycles or into suburban trains, which very nearly came to a standstill too this week as train drivers affiliated to the GDL union threatened to launch an indefinite nationwide stoppage.

GDL and state rail operator Deutsche Bahn reached an accord in last-ditch talks on Sunday night, bringing an end to a labour dispute that dragged on for nearly a year and granting Berlin a reprieve. But negotiating the vast German capital has become markedly more difficult for tourists – a mainstay of the Berlin economy – without the tram and underground network.

Taxis have become scarce and if you can find one, it is likely to get stuck in the formerly rare traffic jams that have now become a feature of the city.

“The hotels and restaurants have been faced with a sharp drop in business. It is no mystery, we all know that at the moment we don’t eat out, in fact we don’t go anywhere,” said Thomas Lengfelder, the head of the Hoga hospitality federation said.

“The strike can deal a lasting blow to Berlin’s image,” said Christian Taenzler, the head of the local tourism promotion office, Berlin Tourismus Marketing. “Berlin has now become a city where strikes are a possibility, which was not the case in the past and this can have consequences.”

It is a sore point for a city that has no significant industrial or financial sector but staggers under debt of some €60 billion ($93 billion). The once-divided capital regards culture and tourism as its potential salvation. And with reason. A record 7.6 million tourists visited Germany’s largest city last year.

The strike is expected to still be going strong by Easter on March 23.

The Verdi trade union is demanding wage increases of 12 percent for the 12,500 employees of BVG, the capital’s public transport company, but talks are at a deadlock.

The transit company, which has just emerged from the red and whose finances remain far from robust, has offered 10 percent but only for employees who joined after 2005. It said it will not extend the offer to the rest of its staff because their contracts are guaranteed until 2020.