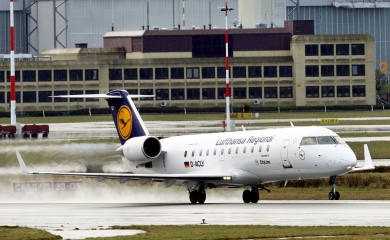 An archive picture of a CRJ200. Photo: dpa

The Canadair CRJ200 plane from Cologne to Paris, with 39 people aboard, was forced to come down at the airport in southern Belgium due to an overheating engine, spokesman Pierre Fernemont said.

“The incident [caused] slight injuries, [people] suffered sprains or a state of shock, when the 35 passengers and four crew members were evacuated upon landing via the normal doors and an emergency exit,” he said.

Originally, three people had been reported injured, but officials later said one passenger has simply accompanied another to the hospital. The emergency landing was made at 7:45 am (0645 GMT) after the crew noticed a cockpit alarm signalling that one of the engines was overheating.

Under emergency procedures the captain then asked for permission to land at the nearest airport, which happened to be Charleroi.

There was no trouble with the landing and other air traffic at the airport was delayed by just half an hour.

Fernemont said he saw no sign of a fire in the engine, but added that experts would carry out tests to discover the cause of the problem.