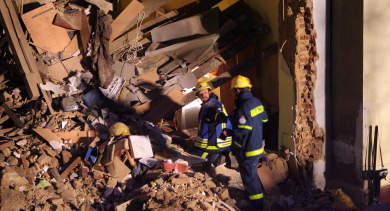 Police are investigating the cause of a large explosion that killed a 45-year-old man and injured nine on Sunday in the German city of Mönchengladbach.

The 45-year-old man had been reported missing after the explosion, but was later found by search dogs in the rubble.

Two of the explosion victims, a 17-year-old girl and a 22-year-old man, sustained life-threatening burns and were flown by helicopter to a special clinic.

After the explosion, the back side of the three-story apartment building collapsed, said police and fire department representatives.

Debris from the explosion landed up to 200 metres from the apartment building, and more than 100 nearby residents were forced to stay in temporary housing. Police said they could not rule out further structural collapse

A police spokesman on Sunday said the incident was, “in all likelihood” a gas explosion. The local gas company has stopped gas flow for the entire neighborhood.

More than 100 fire department workers and 150 rescue workers were on the scene.

A police spokesperson estimated that damages from the explosion will come to several thousand euros, and the building will probably need to be demolished.

Police said they don’t expect to have concrete findings about the cause of the explosion until Monday afternoon.