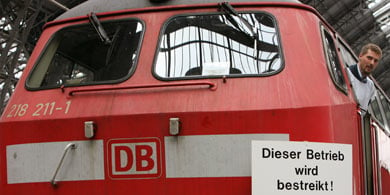 A railway spokesman said Deutsche Bahn has lodged a complaint with the labour court in Frankfurt and was expecting a ruling on Monday morning. The GDL train drivers’ union has announced a nationwide strike from midnight on Sunday after a deal to end a protracted labour dispute with Deutsche Bahn hit a last-minute hurdle.

The strike was expected to plunge parts of Germany into transport chaos, notably Berlin where the underground, buses and trams are already at a near standstill amid a strike by the capital’s local public transport company.

Deutsche Bahn said earlier Friday it had devised a back-up plan to limit the fallout and promised that at least half of normal trains should run on Monday even if GDL went ahead with the strike. Bahn director of passenger transport Karl-Friedrich said the union’s plan to strike was “unbelievable” and added: “We are making every effort to avoid this strike,” while regretting not having received signals from the union. The situation appeared critical in eastern Germany, where just one suburban train per hour was expected to run.

Deutsche Bahn had also made contingency plans for freight transportation that is crucial for German industry, it said. Operation of certain lines between northeastern Leipzig and southern Munich would be transferred to partner companies, as would services to chemical plants.

Deutsche Bahn and GDL faced off in late 2007 and drivers staged several strikes before the two sides announced in late January that they had reached an agreement that included an 11 percent pay rise for the drivers.

But the accord was not finalized, with GDL saying that the railway refused to accord it a special statute independent of other trade unions.