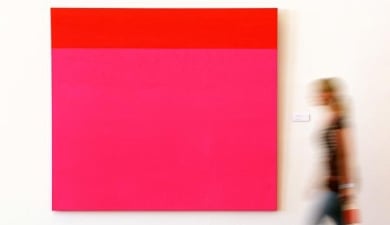 Both orchestras and experimental theatre groups have a place at Berlin’s hottest contemporary music festival. With a theme based on travel and transition, MaerzMusic

2008 features artists from Australia, Spain, Portugal and other countries. Composer Olga Neuwirth kicks off the week with the premiere of her “song play,” Hommage à Klaus Nomi.

It’s incredible what these guys can do with the traditional Japanese Taiko drum. On their quest to bring the sound of the instrument around the world, Kodo stops off in Berlin. Catch the percussion masters Monday night at Philharmonie.

Can’t bring yourself to take off those leg warmers? Shake it like a 1980s superstar as the cast of Miami Nights entertains with hits like “Let’s Dance,” “What A Feeling,” and “I Wanna Dance With Somebody.” Dust off the hair crimper, you’ll fit right in.

Times: Tuesday – Sunday 8pm, with matinees on weekends, through March 16

Dubbed “The European Ambassador of Goodness” by novelist Zadie Smith, British author Nick Hornby is joined by German actor Matthias Schweighoefer Friday night, for a reading of Hornby’s funny new book Slam. Anyone who has ever called on skateboarding star Tony Hawk for a bit of advice won’t want to miss it.

Intellectuals from 45 nations met in Wroclaw in 1948 for the World Peace Congress. Pablo Picasso, whose “Dove of Peace” lithograph became the emblem of the Paris Peace Congress the following year, was among them. Sketches, posters, photographs, documents, drawings, and lithographs created by the painter, dealing with the subject of politics, are now on view at the Willy-Brandt-Haus.

Tracing the Dutch artist’s career from his impressionist and cubist beginnings to his post-1920s geometric fascination, this exhibition provides a fantastic look at Mondrian’s life and work, including major projects like the founding of the journal De Stijl, in 1917, and the development of his “Neo-Plasticism” concept.

Uncle Sam, Superman, and Howdy Doody all have two things in common, they’re American icons that Andy Warhol immortalized with silkscreens in a series known as “Myths.” Ten graphic works from the series are on display in this exhibition, as are photographs that document the artist’s process.

The Scythians, a nation of powerful, horse-riding nomads, had a knack for turning gold into exquisite objects of beauty. This exhibition features over 6,000 ancient treasures that illustrate the fascinating life of this mysterious tribe.

The Munich artist turned 100 this year, which is one great reason to check out this exhibition at Lenbachhaus this week. His work, with its dazzling bursts of color, is energizing, because as Geiger himself said, “red makes you high.”