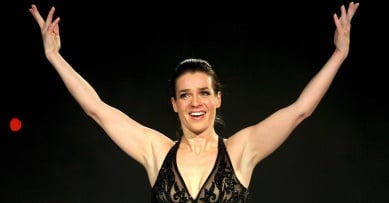 “I’m doing well,” she the 42-year-old after the performance. “Not as many tears flowed as I feared.”

The show in Hanover was a two-hour revue of her career, beginning with photos of her skating as a 5-year-old in communist East Germany. Witt, a four-time world champion, and six-time European champion, was once known as the “beautiful face of socialism.”

Witt is perhaps best remembered for her 1984 Olympic win at Sarajevo, and her interpretation of Georges Bizets “Carmen,” at the 1988 Olympics. She wore the “Carmen” costume for Tuesday night’s show.

At the 1994 Lillehammer Olympics, Witt made an unsuccessful comeback attempt after six years away from the sport.