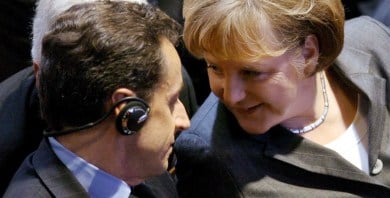 French President Nicolas Sarkozy said after a working dinner with German Chancellor Angela Merkel in Germany that they had reached a “compromise” over his pet project for a union of Mediterranean countries.

“We reached a compromise regarding the Mediterranean Union that we both want and that excludes no one,” Sarkozy told a news conference following hour-long late night talks in Hanover, Germany with Merkel.

Berlin had expressed misgivings about the project, which would include Turkey – whose accession to the European Union Sarkozy and Merkel’s ruling conservatives are opposed – fearing it would create a split within the EU. But Sarkozy apparent was able to assuage German concerns after Merkel concurred they were “in agreement” after the talks.

On another point of contention, Merkel said she and Sarkozy were able reach a deal on EU plans to cut carbon emissions from cars.

Merkel said “a deal is envisaged with France on the European targets to reduce carbon dioxide from cars.”

Sarkozy said that before Monday’s talks Berlin and France’s positions could not have been farther apart but that now there would be a “common position…in the coming days.”

The two countries have been at odds over European Commission plans to cut car emissions of carbon dioxide, which would see automakers that sell cars in Europe assigned to specific targets with a view of cutting emissions overall.

The row is over how to fix goals and penalties for Europe’s automakers including Germany, whose car industry tends to make bigger, and therefore more polluting cars, and France and Italy, which generally produce smaller vehicles.

Monday’s working dinner after an opening ceremony for the CeBIT technology fair was hastily arranged after Paris and Berlin had called off full summit talks planned for the same day. This and the cancellation of a meeting of the two countries’ finance ministers fuelled talk of a diplomatic spat, notably over Sarkozy’s Mediterranean Union plans.

Both countries cited scheduling reasons for pushing back their summit to June 9 and Sarkozy’s office has denied the decision had anything to do with disagreements over the Mediterranean Union.

German media has widely reported on the alleged chill, reporting that Merkel refused to write a joint op-ed piece with Sarkozy about the Mediterranean project, and French officials later said there were subjects on which “some clarification was necessary.”

The two countries were already at odds on the role of the European Central Bank and France’s budget deficit. Sarkozy has repeatedly called on the ECB to do more to support economic growth and to counter the rise of the euro, which has hurt European exporters. But Berlin is adamant that the bank should be free from political interference.

Berlin has also called on Paris to respect a commitment to balance its budget by 2010, while France is holding out for more time.

Sarkozy set the tone for the dinner, making an impassioned call in a speech at a CeBIT opening ceremony for relations to be repaired.

“(It) has never been more essential for France and Germany to get on, to understand each other, work together. France has great admiration for Germany,” Sarkozy said. “I hope you have understood that for me coming here to the CeBIT in Hanover was not just out of politeness. It was an engagement of the heart, an engagement of reason to say to Angela Merkel and to say to you, my dear German friends, that we can work still with you as friends.”

“In order for our partnerships to succeed, it is necessary for each to understand and accept our differences in economic culture,” he said.

Merkel responded by saying that Sarkozy “shows us with his presence (in Hanover) that the German-French cooperation is important to him.”

“If France and Germany are not in agreement it will be pretty difficult to agree in Europe … We have a collective responsibility,” she said.