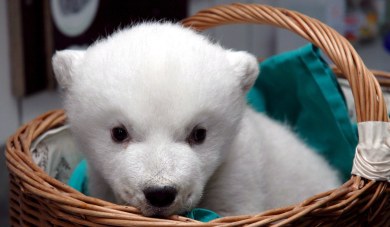 Wilbär is the name of the new fluffy white arrival in the southwestern city of Stuttgart. His moniker is a play on words combining Wilhelma, as Stuttgart’s zoo is called, and Eisbär, which is German for polar bear. Although he was born on December 10 his existence has been kept secret until now.

Wilbär’s mother Corinna appears to have decided to do her maternal duty and not abandon her progeny while still in a cub, Stuttgart zoo director Dieter Jauch said.

The zoo hopes to avoid the intense media interest that Knut attracted last year when the cub was abandoned by his mother and had to be reared by keepers at Berlin zoo. Images of Knut were beamed around the world and polar bear mania brought the zoo a windfall of almost €5 million ($7.6 million) from extra visitors and associated merchandising.

“Wilbär will not be a commercial success,” Jauch said.

But no bear can remain a cute public favourite for long. At two metres long – or tall when rearing in attack – only the foolhardy would want to snuggle up to the 150-kilo Knut now. But Knut is still being celebrated and a movie about him is due to be screened at the Berlin zoo on March 6 in the presence of 1,000 special guests.

Snowflake, or Flocke in German, meanwhile stole the nation’s hearts last month after she was rescued from his mother who appeared to become disturbed by the presence of a camera crew at her home the Nuremberg zoo. That prompted zookeepers to quickly separate her from her mother, because another bear at the same zoo had been suspected of having eaten her two cubs.