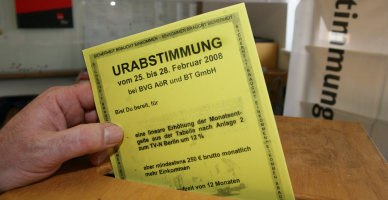 On Thursday night, members of the Berlin public transportation union voted 96.9 percent in favor of a strike to press for higher wages. They only needed a vote of 75 percent to walk off the job in favour of the picket line.

Next Monday, the union’s bargaining committee will decide when the strike will begin. The transportation chaos probably won’t happen before Wednesday, giving their public employers time to make workers a better offer. Should the employers refuse, the strike could drag on until Easter, said public service trade union ver.di’s chief negotiator Frank Bäsler on Friday.

BVG workers went on a 39-hour warning strike in early February. The labour union wants a salary increase of up to 12 percent, or at least €250 more per month. Berlin’s association of employers KAV only wants to increase the salaries of workers hired since 2005.

The impending strike is part of an ongoing labor dispute in Germany over public service pay, which includes everything from local garbage collectors to municipal officials.