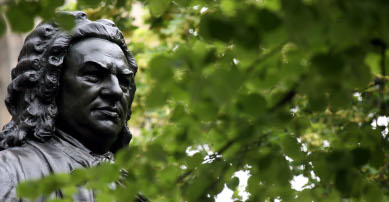 My flirtation with classical music ended 23 years ago when my third and final violin lesson came to a close. Or so I thought at the time.

Everything changed last July when I got married – to a composer. Now my bookshelves, once filled solely with antique novels and biographies of English queens, are filled with scores of music. Strange electronic audio tools consume precious closet space. And a grand piano takes up half the apartment.

It took time to adjust to this at first, but I quickly got used to this new focus on music and even found a way to make it my own: Through history. While my husband develops his art into something entirely new, I venture back, through centuries past, seeking out the lives of those who paved the musical foundation from which he creates.

When we moved to Berlin last autumn, we knew a trip to Leipzig was high on our agenda. Just over an hour away by train, Saxony’s second city was long the place the great Baroque composer Johann Sebastian Bach called home. I had been to the Mozart and Beethoven museums in Vienna, and was eager to scope out one devoted entirely to Bach as well. Last month, when some American friends came to visit, we had our excuse to go.

Armed with the limited knowledge gleaned from the 2003 film “Mein Name ist Bach”, I set out on a mission to learn more about the man. My first stop had to be St. Thomas’ Church. Now I knew Bach played a significant part in shaping Leipzig’s cultural past, but I didn’t grasp the extent of his importance until I found myself inside this Lutheran church just off the city’s lovely medieval square where he spent the last 27 years of his life as cantor and musical director. Approaching the altar it became strikingly clear to me – Johann Sebastian was a bigwig in Leipzig. His tomb is front and centre under the portraits of 31 pastors who preached at the pulpit over the past five hundred years or so.

Eager for more, we made our way across the street to the Bach Museum, only to discover much to our disappointment that it will be closed throughout 2008 for extensive renovations. Fortunately, our musically themed trip wasn’t ruined – we merely expanded it beyond Bach. Unbeknownst to me at the time, the old fugue master wasn’t the only maestro to have had a musical impact on the city. Felix Mendelssohn, Robert Schumann, and Richard Wagner all lived in Leipzig, so I took the closed Bach Museum as a sign that we should instead get acquainted with some of Leipzig’s other music greats.

Across town, a wonderful museum provides a glimpse into the life of Hamburg-born composer Felix Mendelssohn Bartholdy. A key figure in Leipzig’s musical development, Mendelssohn not only revived Bach’s music with a concert of St. Matthew’s Passion, nearly one hundred years after it had last been performed in here, he also founded the Leipzig Conservatory, the first institution of its kind in Germany.

The former child prodigy arrived in Leipzig in 1835 at the age of 26 to conduct the Leipzig Gewandhaus Orchestra some 85 years after Bach’s death. I think about his journey, probably made by coach, and feel grateful for Germany’s fast modern trains. The lovely flat at 12 Goldschmidtstrasse, where the maestro lived with his wife, Cécile and their five children, is filled with original furnishings, crystal chandeliers, and bright yellow walls that transported us back to the 19th century. It makes a great visit not only for music fans, but for lovers of period furniture and interiors as well. Mendelssohn worked here, in the elegant study, composing some of his best pieces like the popular oratorio “Elijah”, and died here in 1847. Concerts are held in the music salon every Sunday at 11 a.m.

It’s easy to imagine local luminaries like Robert and Clara Schumann mingling at one of the Mendelssohn’s merry gatherings a century and a half ago. Schumann arrived in Leipzig in 1829 to study law, but soon switched his focus to music. He married Clara, the daughter of his piano teacher, and a concert pianist herself, in 1840. The pair spent their first four years together in an apartment on Inselstrasse, which is now a museum and school dedicated to them both. Here, the couple entertained friends like Hector Berlioz, Franz Liszt, Hans Christian Anderson, and of course the Mendelssohns. While Clara honed her skills at the grand piano, Schumann wrote his first symphony. Concerts are held Saturdays at 5 pm, as well as on special occasions like the Schumann’s wedding anniversary, September 12.

Leipzig is close enough to Berlin that it’s easy to take a quick daytrip from the German capital, but there’s plenty to see if you plan to stay overnight or even longer. We still have a long list for our next trip, perhaps when the Bach Museum has reopened.

There’s the Leipzig Conservatory, now known as The University of Music and Theatre, which has a famed stained glass window of Bach in the main building. Or maybe we’ll pass an evening at the Leipzig Opera House, which is dedicated to Leipzig-born epic composer Richard Wagner. He was baptized at St. Thomas’ Church and attended the local Nikolaischule, which, luckily for us, is now a restaurant. I wanted to explore the place more to see where Wagner and other greats learned how to pen a tune, but our ICE train was beckoning. If you make it there, have the schnitzel, and try to catch some live music. But don’t expect any Nibelungen “Ring Cycles” here; Monday and Thursday nights feature jazz.

Just over a one-hour train ride from Berlin, Leipzig is a main link on the German rail system. ICE trains from Frankfurt (3.5 hours), Munich (4.5 hours), Hamburg (3 hours) with regular frequency. But if Deutsche Bahn’s fancy high-speed trains are too pricey for you, independent rail operator InterConnex operates two slower trains daily from Berlin, for just €12 each way when booked online.

For dramatic city views, try the Westin Leipzig. A posh lobby bar and vast swimming pool can be enjoyed within its 27-storey tower near the train station. Rates start at €109 a night. Westin Leipzig

University of Music and Theatre