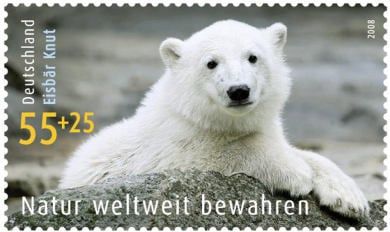 The stamp, which features a younger, more marketable Knut than how he looks now as an adolescent bear, will cost €0.55, plus a €0.25 surcharge.

According to the German postal service, the “Knut edition” will be available from April 10th through July this year in commemoration of the 9th Annual Convention on Biological Diversity, which will be hosted in Bonn. Knut’s official godfather, German Environment Minister Sigmar Gabriel, named the polar bear the official mascot of the convention.

The phrases, “Germany: Polar bear Knut” and “Preserve nature worldwide,” frame the image of the lounging bear. The postal service said the stamp is meant to symbolize the need to protect biological diversity.

Since his birth in December 2006, Knut has earned Berlin Zoo around €5 million in ticket sales and products, graced the cover of Vanity Fair magazine, and will soon star in a film to be released in March.