Jamaican government popular with youth in CDU and FDP

Only slight increase in unemployment

Unemployment in Germany is at its lowest level in 15 years and was better than expected this January, despite stock market volatility and fears of a US recession. The number of unemployed increased in January by 253,000 to 3.66 million, according to a report by the Federal Agency of Employment (BA) on Thursday. January and February are usually slow months for the economy, however, the milder weather might have helped to soften the seasonal effect.

Retiring overseas? Ageing, stress and how to ensure a healthy life abroad 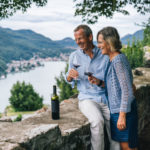 Protect yourself from the rising costs of living